OnlineCityTickets.com is a leading provider of resale tickets in the secondary market specializing in concerts, theater, family shows, traveling Broadway, and sporting events. We offer tickets to events around the world and provide our customers with an outstanding customer service team, cutting edge technology, and low prices. OnlineCityTickets.com is a privately owned and operated company dealing almost exclusively in the online retail of resale tickets. Prices on our sites may be above or below face value and can change quickly with consumer demand. We are not affiliated with any primary website, venue, box office, or supplier.

OnlineCityTickets.com offers all of our customers a 100% Buyer Guarantee, which states that all tickets purchased will arrive prior to the event, be better than or equal to the tickets purchased, and be completely authentic and valid for entry. The majority of inventory sold on our sites can be instantly downloaded or emailed within minutes of purchase. We also offer various last minute services and are often able to give our customers access to events even after they’ve started.

We strive to make our customer experience the most outstanding in the industry. Please call (800) 854-2196 at any time with any questions or concerns. You may also email support@onlinecitytickets.com for any additional information.

Ticket Information
Inventory We are a resale marketplace, not a box office or venue. Ticket prices may exceed face value. This site is not owned by Chicago Tickets .
Guarantee 100% Buyer Guarantee. Tickets are authentic and will arrive before event.
Address
Chicago, IL, United States 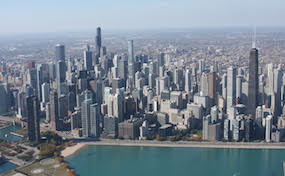 Chicago Information
Chicago events bring some of the top performers from all across the country including the hottest traveling Broadway shows. The city is home to Major League Baseball's Chicago Cubs and White Sox, as well as the NHL's Chicago Blackhawks, the National Basketball Association's Chicago Bulls, and the Chicago Bears of the NFL. The most important venues in the Chicago area include the United Center, Soldier Field, Wrigley Field, Cadillac Palace Theater, the Chicago Theater, Bank of America Theater, Charter One Pavilion, Oriental Theater, and US Cellular Field.

ChicagoBoxOfficeTickets.com is not a primary vendor, supplier, or affiliated with any official website. We proudly provide access to a large supply and low prices online for all secondary market events. Ticket prices may be well below or above face value and will fluctuate with the market. To purchase tickets for all Chicago Sports, Concerts, and Events simply click on the show of interest or call our operators at anytime.

Chicago Cubs Information
The Chicago Cubs are members of the American League Central Division. They began as the Chicago White Stockings, and changed their name to the Chicago Cubs for the 1907 season. They are the oldest U.S. professional sports team that has continuously existed in the same city throughout their existence. They are one of the two remaining charter franchises in the National League, the other being the Atlanta Braves. The franchise recorded a Major League record of 116 wins in the 1906 season, which was tied by the 2001 Seattle Mariners, and hold the modern era winning percentage record of .763. The Cubs have played in seven World Series, but have not won a World Series since 1945, the longest championship drought of any Major League North American professional team, affording them the nickname of the "Lovable Losers." They are also known as the "North Siders" because their home field, Wrigley Field, is located in Chicago's north side Lake View community. It can hold over 41,000 fans. Wrigley Field is the oldest ballpark in the National League, and is therefore full of history.

The Cubs have won two World Series titles, sixteen National League pennants, three Central Division titles, two East Division titles, and one wild card berth. The Cubs have 48 members in the Hall of Fame. They have retired six players but only five numbers, as two of these players, Jenkins and Muddux, wore number 31. The Cubs and the White Sox have divided Chicago in the Crosstown Classic rivalry, breaking the city into North Siders and South Siders, based on which team one supports. The Cubs and the Milwaukee Brewers are a recent rivalry, around only about a decade since the Brewers moved into the National League Central division in 1998.

Chicago Cubs Information
The Chicago White Sox were one of the eight charter franchises of Major League Baseball, and have grown to become a prominent team in the American League Central Division. They are one of two teams based in Chicago, the other being the Cubs, which has created the Crosstown Classic rivalry that splits Chicago and creates intense competition dating back to the 1906 World Series. The White Sox have won three World Series championships, in 1906, 1917, and 2005. The White Sox also have strong rivalries with the Detroit Tigers and the Minnesota Twins, and have competed with both teams for division titles and play off appearances for over 100 years. They have been a strong organization in the American League since their founding at the beginning of the 20th century, and have won six American League championships since.

The White Sox have retired nine numbers and have 33 members affiliated with the White Sox in the Hall of Fame. The White Sox play at U.S. Cellular Field, or "The Cell," which replaced Comiskey Park, the oldest baseball field in use in Major League Baseball prior to its demolition. U.S. Cellular FIeld holds over 40,000 baseball fans. Despite having four seasons with records below 500 between 2008 and 2014, the White Sox have been working to improve their team and are looking to rejoin the postseason race in seasons to come.

Chicago Bears Information
The Chicago Bears were established in 1919. They began in the National Football League, and have remained there since 1920. They compete in the Western division, the National Conference, and the Western Conference before joining the National Football Conference, first as members of the Central Division and then as members of the North Division. The Bears have won nine NFL Championships and one Super Bowl and hold the NFL record for the most players inducted into the Pro Football Hall of Fame and the most retired jersey numbers. The Bears have also recorded more regular season and overall victories than any other NFL franchise. The Bears are one of only two remaining franchises from the NFL's founding.

The Bears play at Soldier Field. Opened in 1924, it is the oldest NFL stadium. Since 1971 it has been the home of the Chicago Bears. With a football capacity of over 61,000 fans, it is the third smallest stadium in the NFL. The Bears have won four conference championships, eighteen division championships, and made 26 playoff appearances. They have a divisional rivalry with the Green Bay Packers, Minnesota Vikings, and Detroit Lions. They have a historic rivalry with the Arizona Cardinals. The Bears also rival the Cleveland Browns, Indianapolis Colts, San Francisco 49ers, and New York Giants.

Chicago Bulls Information
The Chicago Bulls are members of the Eastern Conference in the Central Division. They were established in 1966. The Bulls are known for having one of the NBA's greatest dynasties, winning six NBA championships between 1991 and 1998 with two three-peats. All six championship teams were led by Hall of Famers Michael Jordan, Scottie Pippen and coach Phil Jackson. The Bulls are the only NBA franchise to win multiple championships and never lose an NBA Finals in their history. The Bulls won an NBA record 72 games during the 1995 season and are the only team in NBA history to win 70 games or more in a single season. Many experts and analysts consider the 1996 Bulls to be one of the greatest teams in NBA history. As of 2013, the Bulls were estimated to be the third most valuable NBA franchise according to Forbes.

The Bulls have won six conference titles and nine division titles, one in the Midwest and eight in the Central. The Bulls have retired four numbers in their history. They play their home games at the United Center. The Bulls share rivalries with the Milwaukee Bucks, Detroit Pistons, New York Knicks, and more recently the Indiana Pacers, Miami Heat, and Cleveland Cavaliers. The Bulls-Pistons rivalry was highlighted heavily during the late 1980s and early 1990s. Bulls' traditions include starting lineup introductions, wearing black shoes and socks, and the circus trip.

Chicago Blackhawks Information
The Chicago Blackhawks are a professional ice hockey team based in Chicago, Illinois. They are members of the Central Division of the Western Conference of the National Hockey League. The Blackhawks are one of the "Original Six" NHL teams along with the Detroit Red Wings, Montreal Canadiens, Toronto Maple Leafs, Boston Bruins and New York Rangers. They were founded in 1926. Since 1994, the club's home rink is the United Center. The club had previously played for 65 years at Chicago Stadium.

The club's original owner was Frederic McLaughlin, who owned the club until his death in 1944. Under McLaughlin, a "hands-on" owner who fired many coaches during his ownership, the club won two Stanley Cup titles. The club then went through a slow period and lost fan interest until it came under the control of Rocky Wirtz in 2007. The Blackhawks have won six Stanley Cup championships since their founding in 1926. The team has won four conference championships and fifteen division championships. The Blackhawks have been awarded two Presidents' trophies, in 1990 and 2012. The team has retired seven numbers throughout their history.